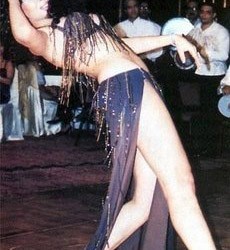 Raqs Sharqi or Raks Sharki is the classical term for Oriental Belly dance.

Although Raqs Sharqi holds its origins to much older dance forms, it was notably developed during the first half of the 20th century by Samia Gamal, Tahia Carioca, Naima Akef, and other dancers who rose to fame during the golden years of the Egyptian film industry. It was also popular in the Levant (Lebanon) and the Maghreb (Tunisia, Morocco).

Although based on traditional folk styles of dance (ghawazi) infused with western influences such as Latin dance, ballet,..., Raqs Sharqi is however often used as a general term to refer to belly dance.

Best Belly Dancer in the World

Help us improve this page:   Correct or update the Raqs Sharqi page