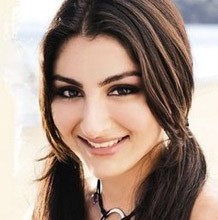 Soha Ali Khan also known as Suha Ali Khan is a famous indian actress and the sister of Saif Ali Khan the famous bollywood star. Soha Ali Khan Pataudi is her full name , she was born on the 4th of October 1978 in New Delhi, India.

Mansoor Ali Khan Pataudi, is her father, he is a former captain of the Indian cricket team.

Sharmila Tagore, is her mother, she is a famous bollywood actress, In addition to her brother, she has one sister Saba Ali Khan.


Help us improve this page:   Correct or update the Soha Ali Khan page