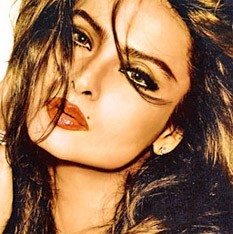 Rekha is a famous bollywood actress who was born on the 10th of October 1954 in Bhanurekha Ganesan.

Rekha has always been considered as a sex symbol in the Indian cinema.

Rekha is a National Film Award winning bollywood actress who has appeared in many indian films.

Rekha is featured as The Diva of Bollywood throughout the 1970s till date.

Help us improve this page:   Correct or update the Rekha page