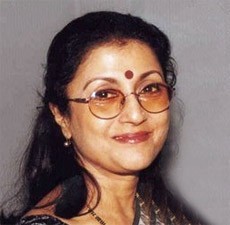 Aparna Sen is a famous indian director and actress who was born on the 25th of October 1945 in Kolkata, India.

Aparna Sen was born to a Bengali family. Her father was a famous veteran-critic and film maker Chidananda Dasgupta.

Her mother Supriya Dasgupta is the cousin of renowned Bengali poet Jibanananda Das. She spent her childhood in Hazaribagh and Kolkata and had her schooling in Modern High School for Girls, Kolkata.

Aparna Sen got married 3 times. She was first married to Sanjay Sen at an early age. Then she remarried again Mukul Sharma a famous indian writer and journalist. Then she got a divorse and married Kalyan Ray, an author and professor of English who teaches at County College of Morris in Randolph, New Jersey, in the United States.

Help us improve this page:   Correct or update the Aparna Sen page