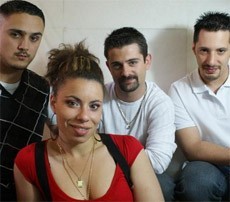 The White Niggaz had participated also in the first French edition of X Factor broadcasted on W9. Back then, the group failed to make it through.

In 2011, they inspired the jury who moved them onto the second stage of the competition.

During their 2011 casting, the White Niggaz group sang the song Pump It by Black Eyed Peas.

Between rap and variety, humor and engaging lyrics, between song and poetry, White Niggaz is a combo formed in December 2006 and consists of two mc's (and singers), a female singer, later joined by DJ Hydden (graduate of the UCPA, Lyon school for DJs) in October 2008.

After performing on some of big scenes and stages in Lyon in 2008 (Ninkasi Kao, CCO de Villeurbanne, Raïl Théatre...) and sang in MJC MJC up to the Parc de la tête d'Or two years in a row, White Niggaz were invited in 2009 to Aum festival in Brest in the mythical Vauban hall. White Niggaz also took the initiative to be the first rap group to stand against discrimination and homophobia, as they placed a strong message into their lyrics and sand at the opening of the gay pride in Montpellier on June 6, before 14,000 people!

Hundreds of "homemade" records have been distributed (with the support of TV and Radio 7l Scoop ). However, The first official debut album of White Niggaz is in preparation for the end of the year, featuring guests like Tonton David, Zino (The Swija) and other surprises...

Help us improve this page:   Correct or update the White Niggaz page