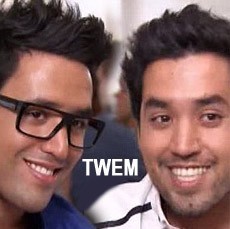 Twem is a music group made of two twin brothers Samir Beni Nouh and Mehdi Beni Nouh born in 1985 in Morocco.

Twem means "twins" in Morocco. That's how they were called by their grandmother and so they chose this name for their group.

Both brothers took part in 2010 in X Factor in the UK where they finished in the last eight in their class.

During their casting in Paris, Twen sang the songs: We belong together by Mariah Carey and Crazy by Gnarls Barkley.

Help us improve this page:   Correct or update the Twem page