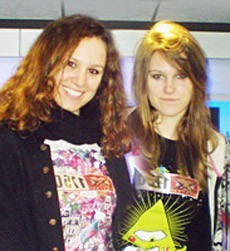 Swalk band was a candidate of X Factor 2011 France. The group Swalk came from Besançon, France.

The Swalk band consists of the two sisters, Marine and Laurie, who were 17 and 21 years when they joined X Factor 2011.

During their casting in Paris, the two young women sang the song Lola by Superbus. Their performance was so good, that the jury members were impressed and moved them to the next step.

Help us improve this page:   Correct or update the Swalk page