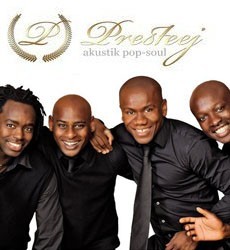 Presteej is a French boys band.

Presteej style of music is defined as Acoustic Pop Soul.

Presteej used to play in the streets of Paris and Berlin at the King Street Stuttgart, until their breakthrough in X Factor 2011 France. They are now working on their debut album.

Help us improve this page:   Correct or update the Presteej page