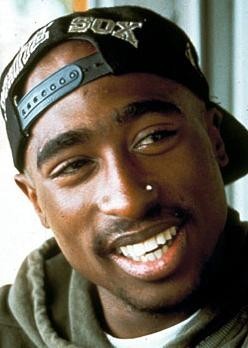 Tupac Shakur full name is Tupac amaru Shakur is a famous American rapper. He was born of the 16th of June 1971, He died on the 13th of September 1996.

Tupac Shakur had other stage names including 2Pac and Makaveli.

Tupac Shakur was a successful film actor and a top-selling recording artist. He was also social activist was recognized in the Guinness Book of World Records as the highest-selling hip hop artist with over seventy five million albums sold worldwide.

Tupac Shakur songs focus on growing up amid violence and hardship in ghettos, racism, problems in society.

His work is mostly political, social and racial. His songs revolve around violence, drugs and alcohol abuse.

Help us improve this page:   Correct or update the Tupac Shakur page