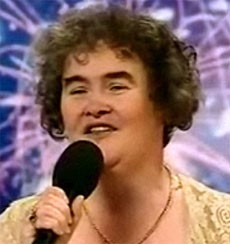 Susan Boyle is a rising star who was made popular in less than 24 hours, when she appeared on the first episode of Britan's Got Talent. Susan Boyle who is a 47 year old woman from West Lothian amazed the judges on Britain's Got Talent including Simon Cowell.

Susan Boyle amazed the world as she stood on stage and sang 'I Dreamed a Dream' from Les Miserables.

Susan Boyle name became an overnight internet sensation, her name was googled like crazy in few hours around the world, and her video got more than 11 million hits on YouTube and more than 6 million hits on Yahoo video in less than 24 hours.

Hollywood star Demi Moore revealed that she and her husband Ashton Kutcher watched Susan Boyle video on YouTube and cried watching her audition and singing on Britain's Got Talent.

Help us improve this page:   Correct or update the Susan Boyle page