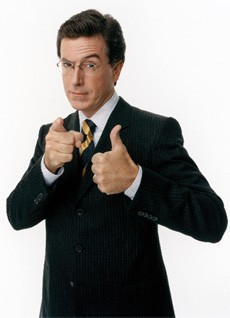 Stephen Colbert is an Emmy-winning hosting one of Comedy Central highest-rated series, which casts him as a right-wing pundit styled after Bill O'Reilly that along with The Daily Show with Jon Stewart is often credited as many television viewers' only source of news.

Stephen Colbert has stirred controversy for his performance at the 2006 White House Correspondents Association Dinner, which raised concerns over the biased nature of his satire.

During the month of April 2007, Google Search Engine declared Stephen Colbert As Greatest Living American, just name topped the most searched keywords on the internet.

Help us improve this page:   Correct or update the Stephen Colbert - Comedian page