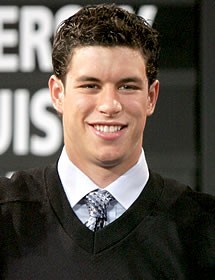 Widely considered to be the best hockey prospect since Mario Lemieux and Wayne Gretzky, Sidney Crosby was drafted first overall by the Pittsburgh Penguins in the 2005 draft.

Sidney Crosby is alsot the captain of the NHL Pittsburgh Penguins. He was the first pick of the 2005 NHL Entry Draft and one of the leading scorers during the 2005-06 NHL season.

Sidney Crosby is the youngest player and the only teenager ever to win a scoring title in any major sports league.

Sidney Crosby has a reputation for taking dives and complaining to officials.