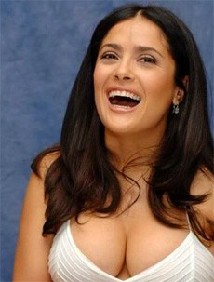 Salma Hayek was born on the 2nd of September 1966 in Coatzacoalcos, Veracruz, Mexico.

Her mother is Diana Jiménez, a famous opera singer from mexico. Her father is Sami Hayek a mexican of Lebanese origin.

Her name Salma was given by her father and it means Safe in the arabic language.

In addition to acting, Salma Hayek is also a director and a movie producer.

In the year 1998, Salma Hayek was selected by Fanoos.com to be one of the most sexy woman alive.

In the year 2007, The Hollywood Reporter ranked Hayek fourth in their inaugural Latino Power 50, a list of the most powerful members of the Hollywood Latino community.

Grown Ups is one of her latest movies in Hollywood.

Salma continues to do charitable work to humanity including creating awareness in the area of violence against women, in addition to the topic of discrimination against immigrants around the world.

Help us improve this page:   Correct or update the Salma Hayek page