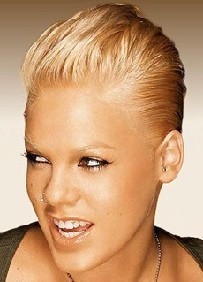 Pink the singer is a famous American singer and songwriter. Her name is also written in the fancy way P!nk.

Her real name is Alecia Beth Moore. Pink was born on the 8th of September 1979.

Pink became famous in the year 2000 when she started her career as R&B music artist, later on Pink moved the the style of pop-rock and rock.

Pink released her first single entitled There You Go.

Pink debut album was released in the year 2000 entitled Can't Take Me Home.

In the year 2001, Pink released her second album was pop-rock style and was entitled Missundaztood.

Pink continues to be a was very successful singer and is considered as on of the top sellers in the industry.

Help us improve this page:   Correct or update the Pink singer page