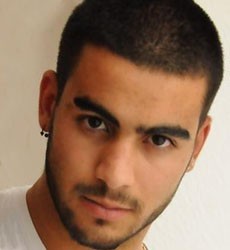 Nedjim Mahtallah is part of the boys band group called 2nde Nature (Seconde Nature), alongside Adrien, Jordan, Damien, and Cormac, who all lost in the category of men below 25 and were regrouped by the talent show jury at the very last moment.

Nedjim Mahtallah is from Champigny-sur-Marne, France. He was born in 1987. He studied acting (theater), dancing, and singing at Académie des Arts Urbains-Courcouronnes. Before that he went to Lycée Léonard de Vinci.

Before joining X Factor, Nedjim Mahtallah had previously performed on stage such as at the Eurovision 2010, when he was a dancer and back-singer for Jessy Matador in Allez Olla Olé. He also took part in the talent show la Nouvelle Star.

Nedjim Mahtallah has done a bit of modelling and is known for his tattoo-covered body. He is often compared to Marco Da Silva.

Help us improve this page:   Correct or update the Nedjim Mahtallah page