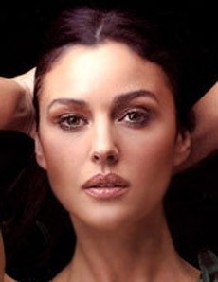 Monica Belllucci is an Italian actress, a former model and a fashion Icon.

Monica Belllucci was born on the 30th of September 1964 in Città di Castello, Umbria, Italy.

Belllucci started her career as a fashion model at the age of sixteen.

She started took role in several movies in the Italian, French, English and Aramaic languages.

Monica married to Vincent Cassel and the couple got a daughter on the 12th of September 2004, whom they called Deva Cassel.

In the year 2004, when Monica Belllucci was pregnant she appeared nude for an Italian Magazine called Vanity Fair, since then she became a an Italian sex symbol.

Help us improve this page:   Correct or update the Monica Bellucci page