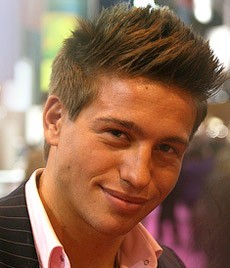 Mickael Vendetta is a Reality TV celebrity from France, winner of the third season of La Ferme Célébrités 2010 on TF1.

Mickael Vendetta is a master in character creation, and no one knows for sure where the truth stops and the lies begin with everything related to his fictive persona. Vendetta is a character built from scratch based on American standards and clichés. He is famous for his skills in manipulating the media and is considered the king of "bogossitude”( hunk that dresses elegantly and acts rich, but with no much substance). Basically Michael is just an image, a bit like Paris Hilton in the USA.

Mickael Vendetta started off from subzero and sough for cunning ways to improve his life as quickly as possible. Actually, his real name is Mickael Adon, but he felt Vendetta would be catchier for marketing. Michael was born on the 3rd of October 1987. He pretends to live on the chic Avenue Foch in the 8th arrondissement Paris, but actually lives with his parents in the modest Groslay area. He declares to hold a French Baccalaureate ES before pursuing his studies in the prestigious acting school Cours Florent, but is thought to have studied for a mere business degree BTS in a technical school instead.

Michael Vendetta first became known in 2008 as a virtual celebrity. He used his charm and looks to become popular online through his narcissistic skyrock blog as well as videos uploaded to Youtube…(His blog refers to him as the French Brad Pitt.) He is then noticed by the production company Trendy Prod, which hosts his online TV reality show “La Bogoss Life de Mickaël Vendetta”. He also does a few commercials for Pringles.

In public, Michael did his best to always be well surrounded with good looking and chic people; he ditched all of his ugly friends!

As a guest on TV shows such as with Jean-Marc Morandini or on Method Cauet, Michael Vendetta managed to get an impressive number of fans, both among the public and celebrity “People”.

Help us improve this page:   Correct or update the Mickael Vendetta page