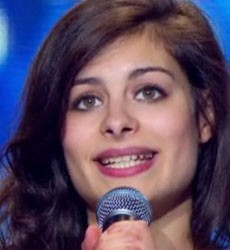 Maryvette Lair is a French singer and actress.

Maryvette Lair became known after taking part in the Talent show X Factor 2011 France. She was Fanoos' favorite candidate in X factor as she was already a finished product ready to sign with a record label; She has her very own universe and unique unclassifiable style, and sings equally well in acoustic Jazz or in electo-pop tracks! She was however voted out on Tuesday 21 June and left in Third place.

The final face-off was between Matthew Raymond-Barker and Marina D Amico.

Maryvette Lair comes from a family of entertainers in the Circus Business. She is noted for her strong yet sweet presence on stage. Although she was originally a professional trapezist, she has made a very strong impression and is expected to soon become a famous actress and singer. With a strong Music Hall background, she has taken part in many shows across France.

In an exceptional performance on 7th of June, Maryvette Lair did the impossible! She sang the epic song Déshabillez-moi (Juliette Gréco) while swinging on a trapeze and sometimes even hanging upside down!

After she was voted off X Factor, Maryvette Lair promised her fans she would return very soon with a new project (a single or a full album).

Help us improve this page:   Correct or update the Maryvette Lair page