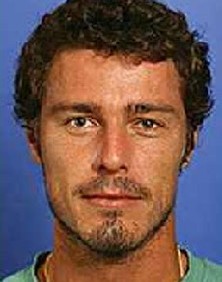 Marat Safin was born on the 27th fo January 1980 in Moscow, Russia.

Safin is the older brother of current World No. 1 WTA player Dinara Safin. They are the first brother and sister group in tennis history in which both siblings reach the number one rank.

In the year 1997 Marat started his professional career in Tennis and was able to reach the Number one world rank for a total of Nine weeks between November of 2000 and April of 2001.

He won his first Grand Slam title at the 2000 U.S. Open after defeating Pete Sampras, and won the 2005 Australian Open, defeating Australian Lleyton Hewitt in the final.

In the year 2008, Safin was the first Russian in history to reach the semi-finals at the Wimbledon Championship.

On the 2nd September 2009 and during the US Open, Safin was able to make at the number 61 in the official world men's tennis rankings.

Help us improve this page:   Correct or update the Marat Safin page