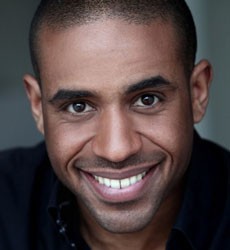 Loup-Denis Elion is a French actor, mostly known for his role as Cédric in Scenes de Menages Series on M6 TV.

In the TV series, Elion plays the boyfriend and housemate of Marion played by Audrey Lamy.

Loup-Denis Elion was born on 9 Septembre 1979. Elion is also a tenor opera singer, and studied at Cours Florent.

Help us improve this page:   Correct or update the Loup-Denis Elion page