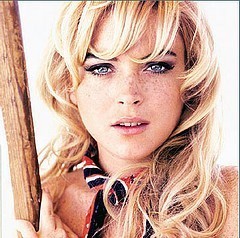 Lindsay Lohan has a natural beauty that she began modeling at the age of three.

Lindsay Lohan mother is Dina a former Radio City Rockette. Her father is Michael who was a Wall Street trader before he struck it rich with a family pasta business.

Michael Lohan has now directed his money and fortune into film and movie production.

Help us improve this page:   Correct or update the Lindsay Lohan page