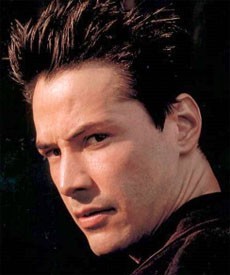 Keanu Reeves was born on the 2nd of September 1964 in Canada.

Keanu Reeves became popular after his performance in the action packed movie Speed and Speed 2 along with Sandra Bulock.

In the early 2000, Keanu Reeves added more fame to his acting role by starting in the sequel sci-fi movies of The Matrix.

Help us improve this page:   Correct or update the Keanu Reeves page