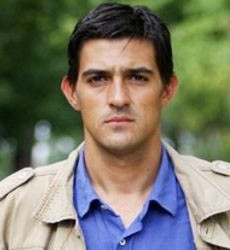 Jean-Pascal Lacoste is a French singer, actor and TV host.

Jean-Pascal Lacoste became famous for being casted on the very first edition of French TV reality show Star Academy 2001. Nicknamed Jipé, (JP or JayPi), he was famous for his quarrels with Jenifer Bartoli, the winner.

After his participation, he released the hit single "L'Agitateur". His third single Chanteur Con, composed by Jean-Philippe Argento, also remained for 15 weeks in the top charts.

Jean-Pascal Lacoste released his debut album Jean-Pascal, qui es-tu ? on 20 August 2002. It was such a big flop that his tour in France was cancelled.


In June 2002, Jean-Pascal Lacoste became a TV host on TF1 in a sport program Tous ensemble, then in a Incroyable mais vrai !, alongside Bruno Roblès, Roger Pierre andSophie Favier. In 2006, he started a career as actor in the police series Section de recherches. Since September 2008, he hosts various TV shows on NRJ 12.

Help us improve this page:   Correct or update the Jean-Pascal Lacoste page