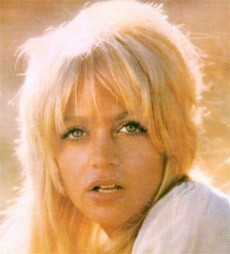 Her full name is Goldie Jean Hawn, Goldie Hawn was born on the 21st of November 1945.

Goldie Hawn is a American actress, also she is a good film director and a famous producer.

Goldie's career is best known for her roles in movies such as Bird on a Wire, The First Wives Club, The Banger Sisters and Death Becomes Her opposite actor Bruce Willis,

She was also known for her roles in the films Foul Play, Private Benjamin, Wildcats, Overboard.

In the year 1969 Hawn won the Academy Award for Best Supporting Actress for her performance the the movie Cactus Flower.

Goldie had a long relationship with actor Kurt Russell who was her her boyfriend since the year 1983.

Help us improve this page:   Correct or update the Goldie Hawn page