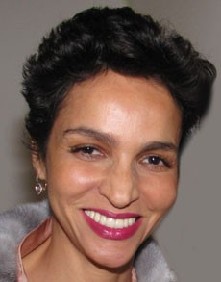 Farida Khelfa is a French actress and a former model. She was born in 1962 in the small town of Venissieux , near Lyon, to parents of Algerian descent.

She started her career in modeling at a young age and soon became a close friend to fashion designer Jean-Paul Gaultier.

She got married to French businessman Henri Seydoux.

In 1985, Farida Khelfa had her first appearance in the french film La Nuit porte-jarretelles by Virginie Thévenet. She also played the role of the queen in the movie Les Mille et Une Nuits de Philippe de Broca in 1990.
Between 1990 and 2006 Farida stayed away from acting.

In Television, she played a role in the French TV series Le Bijou indiscret in 2008.

In 2009, she played the role of Malika in the famous Television series Aïcha, followed by Aïcha 2 in 2011; A french TV series by famous French-Algerian director Yamina Benguigui.

Help us improve this page:   Correct or update the Farida Khelfa page