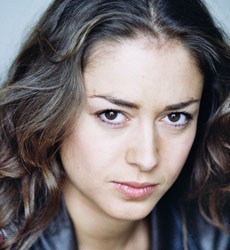 Emmanuelle Bouaziz is a French actress of Arab descent.

Emmanuelle Bouaziz played Krystel in the teen French musical TV Series 'Chante', created for France2 by Jean-Pierre Hasson and Olivier Thiébaut in 2008. Other actors include Sam Touzani as Karim Brahi, Djamel Mehnane as Renaud, Laurent Marion as Stan, and Karim Merabet as Wlad.

Emmanuelle Bouaziz often appears in French soaps, such as the fiancée in Mes amis, mes amours, mes emmerdes (2010 TV series), and Laure Levasseur in Julie Lescaut (2009 TV series), or even as one of the girls of Cocktail de filles in 2007.

In 2011, Emmanuelle Bouaziz also took part in the French adaptation of the Mama Mia Abba Dance Musical Show, first played on the stage of Théâtre Mogador.

Help us improve this page:   Correct or update the Emmanuelle Bouaziz page