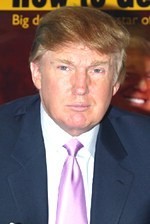 Donald Trump also known as Donald Trump is not only one of the world's richest men, but one of its most recognizable.

Donald Trump is the CEO of Trump Organization, an American-based real estate developer, and the founder of Trump Entertainment, which operates several casinos. He received a great deal of publicity following the success of his reality television show, The Apprentice in which he serves as both executive producer and host for the show. He is the son of Fred Trump who was a wealthy real estate developer based in New York City.

Despite a privileged upbringing, Donald Trump did not inherit anything, he went on to fame and fortune, thanks to his business accomplishments and smart thinking.

Donald Trump truly a remarkable personality, he was able to pull off one of the most remarkable business turnarounds in history. After accumulating a multi-billion dollar fortune, he saw most of it wiped away under massive loan payments his companies were reportedly carrying $8.8 billion in losses at their worst, only to regain it after making some very clever business moves.