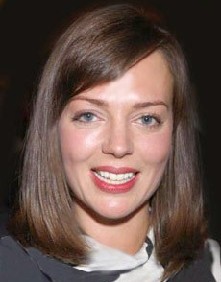 Daisy Beaumont is a British actress famous for her work parodying stars such as Catherine Zeta Jones and Victoria Beckham. She appeared in the Show Star Stories which aired on Channel-4.

Daisy is also known for other hit TV programs such as Mumbai Calling, The Border, Hotel Babylon, Agatha Christie Poirot, The Bill and East-Enders.

On the big screen, Daisy Beaumont had a small role in Shanghai Nights, a famous action movie which starred Jackie Chan.

Her best performance to-date was in the Comedy Show Mumbai Calling, which was a big hit in Australia.

The story of the show takes place in a call centre in Mumbai. The centre is run by Dev Rajah the big boss who is interested in chasing girls from his staff and using the workplace for his own benefit.

Daisy Beaumont plays the role of Terri Johnson, a female who gets sent to Mumbai from the London to sort out the office and teach the staff about regional accents.

Help us improve this page:   Correct or update the Daisy Beaumont page