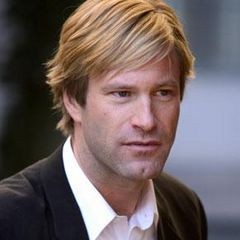 Aaron Eckhart is a famous american actor, His full name is Aaron Edward Eckhart. Aaron Eckhart was born on the 12th of March 1968.

Aaron Eckhart was born in California, UnitedStates. When he was 13 years old, He moved to England with his father and the rest of his family.

Aaron Eckhart began his career in acting by performing in few school theater plays at the Cobham Hall. He soon left college without a degree, but later he managed to earn a diploma through a correspondence course.

In the year 1994, Aaron Eckhart graduated from Brigham Young University with a Bachelor of Fine Arts degree in movies.

Aaron Eckhart spent the 90s in New York, struggling and doing his best to become a known actor.

Aaron managed to take leading roles in a many romantic comedy and thriller movies.

Help us improve this page:   Correct or update the Aaron Eckhart page