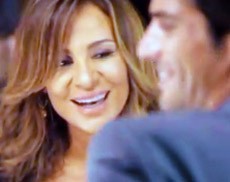 The video clip of Carole Samaha for the song Khalik Behalak was produced by LACARMA and aired by Melody Music during the month of October 2010.

The song was written and composed by Marwan Khoury. The clip was directed by Thierry Vergnes.

The clip was shot with Italian model Alessandro Coppola who later had a similar experience with Alf w Miye a videoclip by Nawal Zoghbi in 2011.