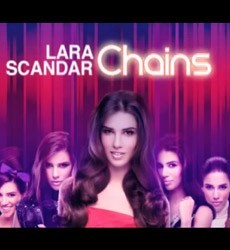 Chains is her second official song after Mission Is You, and was released on Thursday the 16th of June 2011. It was produced by JMR Productions.

The clip seems slightly inspired by Sophie Ellis Bextor's Get Over You, produced in 2002 by Polydor Ltd,... which in turn was inspired by the famous 80s cult movie The Mannequin, starring Andrew McCarthy, Kim Cattrall, James Spader, and directed by Michael Gottlieb. An ancient spirit from Egypt occupies the form of a department-store mannequin. A store employee is the only one who sees the woman within, and they fall for one another. With her as his muse, he re-invents the department store as a cutting-edge fashion center and does an amazing job as a window dresser.

The movie was actually itself a remake of an earlier black and white film called One Touch of Venus, directed in 1948 by William A. Seiter, starring Robert Walker and Ava Gardner. It was released by Universal Studios, and was based on the Broadway musical of the same name, with book written by S. J. Perelman and Ogden Nash, and music composed by Kurt Weill.

The moving mannequin idea reappeared in many other movies, ads and clips, including in Confessions of a Shopaholic (2009) starring Isla Fisher, Leslie Bibb, Hugh Dancy, and directed by P.J. Hogan.

So who do you think did a better job??