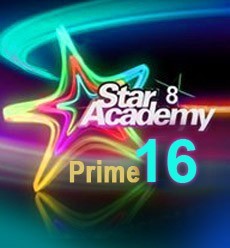 The final prime of star academy 8 was the sixteenth prime of the season and it took place on Friday the 15th of July 2011.

The guests of this prime were Lebanese singer Najwa Karam and Tunisian singer Saber Al Rubai.

During the final prime of Star Academy 8, Roula Saad the president of the Academy announced that the next season of Star Academy 9 will see the light early next year and promised surprises and fun as usual.

Sarah Farah, Nesma Mahgoub and Ahmad Izzat were the last students left in the Academy.

By the end of the Prime, Nesma won the season, hence the predictions that Sara was going to win did not occur.

Congratulations to the Winner of Star Academy 8 Nesma from Egypt.

Do you think someone else deserved the title? The voting is still on:
VOTE NOW FOR YOUR FAVORITE CANDIDATE IN STAR ACADEMY 8