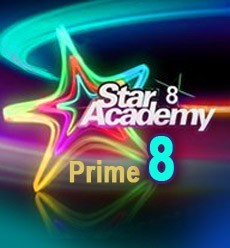 The eighth prime of star academy 8 took place on Friday the 20th of May 2011.

The Nominees of prime 8 were Hussam Taha, Mohamad Abdallah and Nina Abdel Malak.

The guest was the badly aging singer Assi El Halani.

Houssam was saved by the public's votes, Mohamad by the other students and Nina was voted out of the program.

Help us improve this page:   Correct or update the Prime 8 Star Academy 8 page