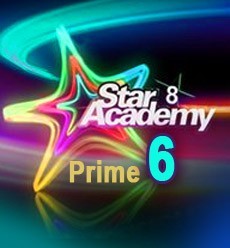 The sixth prime of star academy 8 took place on Friday the 6th of May 2011.

The prime as usual attracted many viewers from the Arab world who enjoy watching this show.

The guests were Andrea and Nabil Shuail.

The nominees of Prime 6 were Karima Ghaith, Karim Kamel, and Ahmad Izzat.

Karim was saved by the public, Ahmad by the other students and Karima was voted out of the show.

Help us improve this page:   Correct or update the Prime 6 Star Academy 8 page