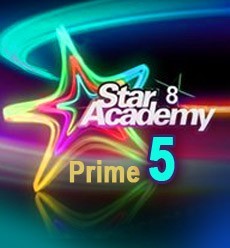 The fifth prime of Star Academy 8 took place on Friday the 29th of April 2011.

The nominees of this prime were:

The guests of Prime 5 were the Trinidadian-Dutch singer Haddaway, and the Lebanese singer Marwan Khoury.

At the end of the Prime Karim received the highest number of public votes and was saved, Nina got the support and votes of the other students, so Yasmine had to leave.

Help us improve this page:   Correct or update the Prime 5 Star Academy 8 page