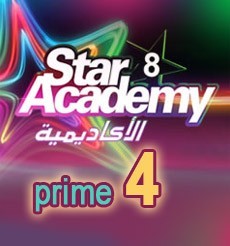 The fourth prime of Star Academy 8 took place on Friday the 22st of April 2011.

The nominees for the third week were all guys this time:
Mohammed Rahma from Bahrain
Hussam Taha from Syria
Abdel Salam Mohamad from Kuwait

It was expected that Mohamad Rahma would be leaving on this prime as it was not his first nomination. And this is exactly what happened, since Abdel Salam was saved by the public's votes, and Houssam got the support of his friends.

It is worth mentioning that Thursday 21st of April was the birthday of Rami El Shomali, a student from season 7. Rami Chemali passed away in a car accident last year when he was on a trip in Egypt.

Help us improve this page:   Correct or update the Prime 4 Star Academy 8 page