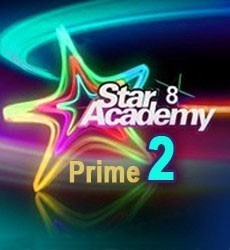 The second prime of Star Academy 8 took place on Friday the 8th of April 2011.

The nominees of the 2nd prime were Karima Ghaith, Lian Bazlamit and Mohammad Al Qaq.

The guest of honor for Prime 2 was Hayfa Wehbeh. The other guest was Adam Clay (Bluemind - I Was Born in a System - Babylonia).

Karima received the highest number of votes by the public and was saved. Lian got the support of the other students, therefore Mohamad became the first student to leave from Star Academy 8!

Do not forget to vote for your favorite candidate in Star Academy 8.

Help us improve this page:   Correct or update the Prime 2 Star Academy 8 page