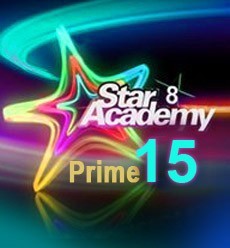 The fifteenth prime of star academy 8 took place on Friday the 8th of July 2011.

The Nominees of prime 15 were: Gilbert Simon from Lebanon, Ahmad Izzat from Egypt and Omayma Taleb from Tunisia.

The guests of this prime were Egyptian singer Samira Said and Lebanese comedian Bassem Feghali and former winner Saad Ramadan.

As for the final results, the audience saved Ahmad, while both Omayma and Gilbert had to leave the Academy on its fifteenth prime.


Who do you think should win this season:
VOTE NOW FOR YOUR FAVORITE CANDIDATE IN STAR ACADEMY 8

Help us improve this page:   Correct or update the Prime 15 Star Academy 8 page