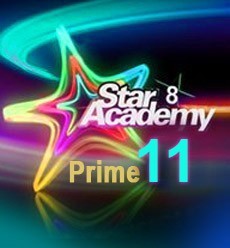 The eleventh prime of star academy 8 took place on Friday the 10th of June 2011.

The Nominees of prime 11 were:

The guests of this prime were Lebanese Yara singer and International singer Mohambi.

In the end, Abdel Salam was brought back thanks to the public votes. Daqdouq was saved by his colleagues, leaving Ephram out of the Academy.

Help us improve this page:   Correct or update the Prime 11 Star Academy 8 page