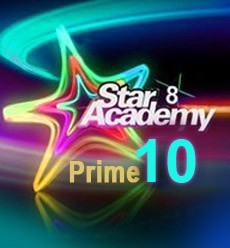 The tenth prime of star academy 8 took place on Friday the 3rd of June 2011.


The guests of this prime were Egyptian singer Angham and Tunisian singer Ahmad El Sherif.

In the end, Abdel Salam was brought back thanks to the audience votes (57%), whereas Christine was saved by her colleagues, making M. Abdallah the next student to leave the Academy.

Help us improve this page:   Correct or update the Prime 10 Star Academy 8 page