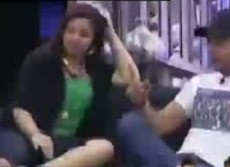 Nisma Mahjoub Menstruation Scandal :
It was now time for Nesma Mahgoub to be under the spot light and shunned by the tabloids in "fadi7t nisma mahjoub". While talking to the other students in the lounge and sitting on the sofa in the academy, Nesma casually checks if she was menstruating by checking herself then smelling her fingers right in public and in front of the cameras (which she most likely forgot after such a long time).

On his show Lel Nasher, Tony Khalifeh sarcastically wondered how she would be able to face an audience at a concert to sing, with people reminiscing that image in their heads..

Read about other Rumors and Scandals in Star Academy 8.