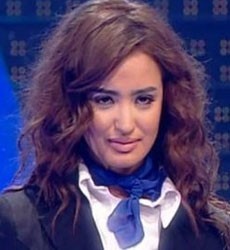 Nina Abdel Malak is a student in Star Academy 8 from Lebanon.

Nina Abdel Malak (Nina Abdelmalak or Nina Abdel El Malek) was born in the year 1993 in Beirut, Lebanon. She grew watching Star Academy, until she was finally able to take part of it at the age of 18.

She loves painting, a hobby she took from her father. She loves art and posters, her room is filled with posters of celebrities from around the world. She loves all sorts of music, with special interest in Tarab.

Nina Abdel Malak was a nominee in Prime 5 Star Academy 8, but got the votes of the other students and was saved.

Nina was nominated for Prime 8 Star Academy 8 and voted out of the program.

Help us improve this page:   Correct or update the Nina Abdel Malak page