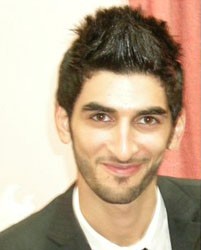 Mohammed Rahma or Mohamad Rahme is a student of Star Academy from Bahrain.

Mohammed Rahma already has a few songs of his own. He loves playing the Oud and the Guitar.

Mohammed Rahma joined Star Academy because he wanted to gain more experience and to become more popular in the Arab world.

Despite the Bahrain Protests and unrest in his home country, he moved to Beirut to take part in Star Academy 8.

Mohamad Rahme was a nominee on Prime 3 Star Academy 8, but was saved by the votes of the other students. He was nominated again for Prime 4 Star Academy 8 and was voted out of the show for good..

Help us improve this page:   Correct or update the Mohammed Rahma page