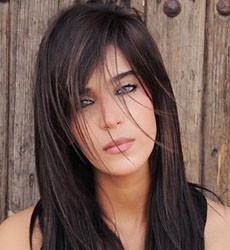 Karima Ghaith is a candidate in Star Academy 8, from Morocco.

Her name is sometimes also written as Karima Ghait,Karima Gouit or Kareema Gith.

Karima Ghaith is from Berber ethnicity, comes from Marrakesh, and worked mostly in Casablanca. She had already worked as a model, and has also done a bit of acting. She actually stars in a TV series of more than 120 episodes, called Zeina, currently being aired on Al Qanat al Oula in Morroco.

Karima Ghaith is very beautiful and is already being called the new Sofia El Marikh!

Karima Ghaith was 19 years old when she joined the Academy. As a model, Karima appeared on Billboards thorough out Morocco in many advertising campaigns.

She likes to wear trending clothes and to be take care of her looks. Karima has studied Economy and Finance. Her love for singing made her join Star Academy, hoping for fame and stardom.

Karima Ghaith was nominated for the Prime 2 Star Academy 8, but was saved by the public's votes.

Karima Ghaith was nominated again in Prime 6 Star Academy 8, and voted out of the show.

Help us improve this page:   Correct or update the Karima Ghaith page