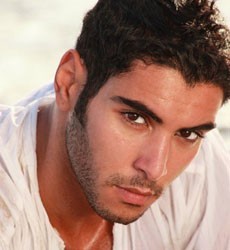 Karim Kamel is a student from Egypt in Star Academy 8.

Karim Kamel is a model and an actor from Hollywood (source needed). His parents encouraged him to become an actor. He traveled to USA and studied acting at UCLA Los Angeles. He followed the footsteps of his older brother Sameh Kamel who also works as an actor in Hollywood.(also information lacking)

His full name is Karim Kamel El Sheikh. In 2011, Karim was part of the youth who took part in the Egypt Protests.

Karim Kamel works out to stay fit, and has a tattoo on his left inner arm.

In 2011, he participated in the casting of Star Academy and was accepted as a student in Star Academy 2011. Karim sang in both English and Arabic in front of the judges. He also played the Derbakeh (Darbouka) instrument.

Karim was nominated for Prime 3 Star Academy 8, but was brought back thanks to the public's votes that gave him more than 45%.

Karim Kamel was a nominee in Prime 5 Star Academy 8, but was saved by the public's votes.

Karim was nominated again in Prime 6 Star Academy 8, but was saved yet again by the public's votes.

Controversy surrounding Karim Kamel: Check the gossip about Karim in Rumors and Scandals in Star Academy 8: Because the producers of Star Academy let a rumor pass through on air by one of the other students (Sarah Farah) that he was gay , Karim's family decided to file a lawsuit against the program for defamation as per his sister Dalia Kamel who made an intervention on TV with Tony Khalifeh. The Arab tabloids saw in Karim's gay sexual orientation a juicy information and exploited it to unprecedented levels. It was only until Karim Kamel left the Academy that he realized what all the commotion was about, and he was shocked and saddened by the degree this incident had taken outside of the Academy.

Help us improve this page:   Correct or update the Karim Kamel page