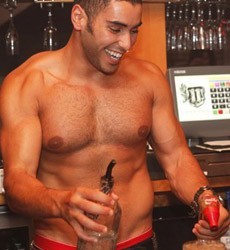 An argument occurred between the Syrian Star Academy student Sarah Farah and the Egyptian student Karim Kamel, and later Sarah accused Karim of being gay to her friend Lian Bazlamit, but when confronted by Karim she denied it.

Apparently Sarah had a crush on Karim from the beginning of Star Academy, and when she came on to him, he turned her down. It was also rumored that Karim had a thing for Lebanese student Nina Abdel Malak instead. However Nina told Karim she is in a relationship with Mohammad Al Qaq.

On the other hand, a bunch of photos surged on the internet depicting Karim as a homosexual, prompting those close to him to say these photos were released for revenge by Sarah''s friends.

The photos are rather innocent and hardly deserve all the hipe; Karim posing next to a bodybuilder friend (not necessarily his gay lover) at the gym, Karim hanging with his buddies at a pub and pulling pranks, or Karim wearing a Genie costume most probably for a fancy dress event...To note that most good looking men happen to be gay so he wouldn''t be the first, and most male singers are known to engage in homosexual activities (In Lebanon, the Arab World, or the rest of the World for that matter)

This incident got an unexpected media and tabloid coverage, to the extend that even a Facebook group called Star Academy 8 Karim kamel is GAY was created. The majority of the comments posted were however positive and supportive to the young Egyptian man.

Apparently Karim had worked at one point in a gay club in the US, and this was the source of all the photos.

See the full list of Rumors and Scandals in Star Academy 8.