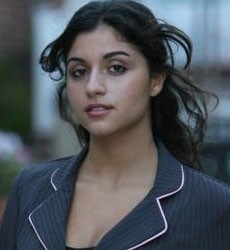 Christine Saade is Lebanese-Canadian who immigrated to Canada in 2002. She came back to Lebanon in 2011 from Toronto to take part in Star Academy. She also wanted to visit her beloved grandmother and grandfather.

Her father encouraged her to take part in Star Academy 8. Christine Saadeh dances the hip-hop, she has a good fit body, which she keeps in good shape by swimming, dancing and exercising regularly.

Christine has a beautiful voice, she sings in both English and Arabic.

During the show, her grandfather passed away and naturally this was used by the Star Academy producers aka Roula Saad and Co. as cheap emotional drama slash entertainment on the show...

Christine Saade was a nominee for Prime 10 Star Academy 8 but was saved by the votes of the other students.

Christine was voted out on June 17th, and had to leave the Academy.

Help us improve this page:   Correct or update the Christine Saade page