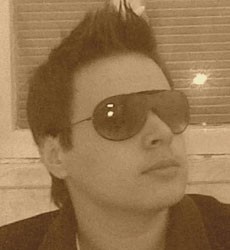 Ahmed Bukasha was a candidate of Star Academy 8. He applied to the show hoping to be part of it.

Ahmed Bukasha was rumored in many occasions to be among the top 20 students, however he was not chosen.

Ahmed Bukasha is also known as Ahmad Boukasha and he is from Cairo, Egypt.

Help us improve this page:   Correct or update the Ahmed Bukasha page