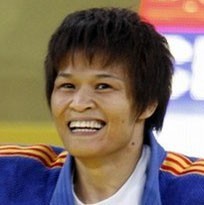 Soraya Haddad also known as Thuraya Haddad or Suraya Hadad was born on the 30th of September 1984 in Algeria.

Soraya Haddad is an Algerian Judoka and an African champion who won three times in the year 2004, 2005 and the year 2008.

Soraya Haddad from Algeria kicked off the Arab quest for Olympic glory in Beijing.

Soraya Hadad won the bronze medal in the women’s judo for 52 kg finals.

Help us improve this page:   Correct or update the Soraya Haddad page