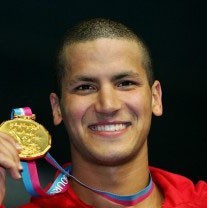 Oussama Mellouli is a famous swimmer from Tunisia. Oussama has made history when he won the first Arab Gold medal victory in the finals of 1500 meters freestyle swimming at the Beijing 2008 Olympic Games.

Help us improve this page:   Correct or update the Oussama Mellouli page